As people may or may not know there were two back-to-back anti-racist/anti-fascist demonstrations that took place on the 26th of July. These events were counter-protests that just happened to take place in two neighbouring suburbs in Sydney’s Inner West and at conveniently corresponding times.

This is the account of what happened on that day.

After only a brief period of learning of both events, we were really pressed for time and uncertain as to how these events would turn out. With ongoing trolling, whinging and constant threats from the far-right of physical violence as well as the rain that arrived on the day, many of us were unsure as to how the day would turn out. Prior to the event we were contacted by journalists from the magazine VICE, as well as a string of other independent journalists.

The first action planned was at Marrickville Woolworths at 11am on a rainy Saturday morning in response to a picket organised by the Party for Freedom, an Islamophobic nationalist group devoted to a chaotic and poorly organised anti-immigration campaign targeting Muslims, choosing Woolworths as its target due to its usage of an ad wishing Muslims a ‘Happy Ramadan’. Upon arriving at the designated meeting area, we noticed our police escort alongside a large number of private security hired by the shopping centre. Members of Marrickville’s community had congregated to stand side-by-side with anti-fascists in defence of their multicultural and proudly diverse community. At this point we noticed a known white supremacist belonging to the Australia First Party lingering in the crowd (below). 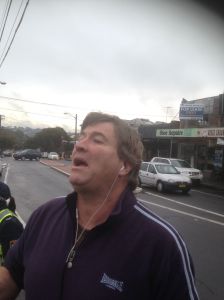 The man feebly produced a small portable camera from his pocket and attempted to film the faces of those who had gathered to oppose racism. When he was exposed as a fascist he was circled and quickly escorted across the street by the police, who had proceeded to tell counter-demonstrators that their protest was illegal on the grounds that they had not been consulted, claiming that the Freedom Party were doing the “right thing” and that we would not be able to counter-protest. After briefly consulting, a consensus was reached within the crowd to disregard threats and deterrents from the police and continue with the original plan. The crowd proceeded to march around the police and around the corner, where there were a small congregation of Freedom Party members brandishing Islamophobic slogans and signs. As the group approached them with chants, they were quickly surrounded by members of the community. Despite their rhetoric, self-proclaimed ‘warrior’ ethos and violent, chauvinistic online threats directed at counter-protestors, when confronted by the community, this small band of would-be-if-they-could-be hate-peddlers darted backwards. Their most vocal and aggressive attendee was Ralph Cerminara, leader of the Australian Defence League. 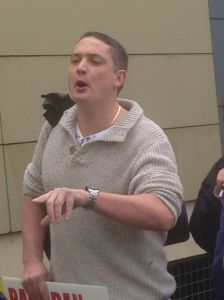 (Above: Ralph Cerminara, ADL leader and fraudster. See http://www.anzmi.net/ and search for his name under ‘C’.)

Cerminara was quick to hurl slurs such as “Muslim monkey” and “fucking Muslim slut” to a social worker in her late ’50s. Other notable attendees were Nick Hunter Folkes, the leader of the Freedom Party, who was in tears of panic when he too joined in verbally assaulting people (while behind the line of police). After around 20 minutes of emotional displays by the eight strong Freedom Party – distraught at the overwhelming opposition to their hatred and their inability to respond to the local community – they left with a police escort, abandoning their signs, placards, leaflets, and mock burqas.

Despite the overwhelming success of the first action our work was not over. The second action was to picket an event being organised by the fascist Australia First Party, one which called for the end of ethnic cleansing of White Australians (!) and opposition to the presence foreign students in Australia.

Having dispatched the Freedom Party, a march took off promptly from Marrickville and proceeded – much to the dismay of police – to the AFP’s base in Tempe, known as ‘The Bunker’.

The vibe of this event would be different. Days before, the AFP’s Fuehrer Jim Saleam had threatened the community with the formation of “Nationalist Patrols”, stationed in the area and on the alert for anti-fascists. Despite Saleam’s rather sensational claims, the march carried on without a hitch and we were joined by both curious and concerned members of the community, many none the wiser to a fascist base operating in their suburb.

Complete with the presence of families, grassroots community activists and a strong black bloc presence, protesters arrived at The Bunker prior to their planned forum. The front gate was locked while its window was cracked, littered with graphite and anti-fascist posters pasted on by the community in disapproval of the fascist presence. Following a series of speeches given by activists from an array of groups and collectives as well as ongoing rounds of chants, a portable speaker was rigged up which blasted anti-fascist songs, drowning out the fascist event.

It was at this point that life stirred, if only for a moment, within The Bunker. One or two bizarre-looking middle-aged men with large beer-guts appeared in the window. One, dressed as a ‘Sheik’, carried a toy gun displayed a sign littered with spelling errors. To add insult to injury, the AFP’s puny response couldn’t help but upset their Fuehrer, who was heard wailing from inside his little gated community. 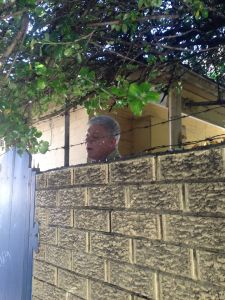 (Above: Saleam once again finds himself behind walls and barbed wire.)

At some point a group splintered and went around the back of The Bunker where a small group of assorted boneheads dressed in Golden Dawn regalia were gathered. Upon seeing the bloc move towards them chanting “Die Nazi Die” they quickly retreated into back The Bunker, followed by a long line of riot police that formed a blockade between the group and The Bunker. It was then that the boneheads returned and began taunting anti-fascists from behind the police line. They also threw batteries at and spat on two younger counter-protesters.

At this point the excitement had quietened down and people had congregated out the front for the final speeches and to assess the day’s events. Photos were taken of our banners and flags that were draped over the decrepit building in which the fascists were cowering inside.

(After leaving the event it was discovered that around four boneheads (led by everyone’s favourite local Sturmfuhrer ‘Slasher’) had paraded around south King Street complete with sieg heils and cuddles for the locals. Slasher – a Newtown-based Lebanese and meth addict – is a known associate of neo-Nazis who have used his place as a rally pointing in the past: an interesting choice for arranging late-night booty calls with white supremacists.)

The bickering among Freedom Party activists after the vent was amusing, as each blamed the other for the piss-poor turnout to their little hate mixer. Some of their supporters went so far as to produce false police statements claiming that counter-demonstrators attacked them with “knives and machetes” … before retracting the claims and then blaming police for lying to them.

The event was reported on by VICE. Saleam was wise enough to produce his views on the matter and issued the statement “I’d like to catch them, but I don’t want to hand them over to police. I’d much prefer it if some of our guys touched them up and they never came back” in regards to anti-fascist protesters. So when in Tempe, be careful of the invisible fascist vigilantes! 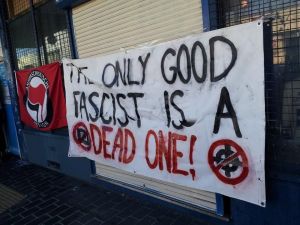